The Farce of “Sold Over Asking” 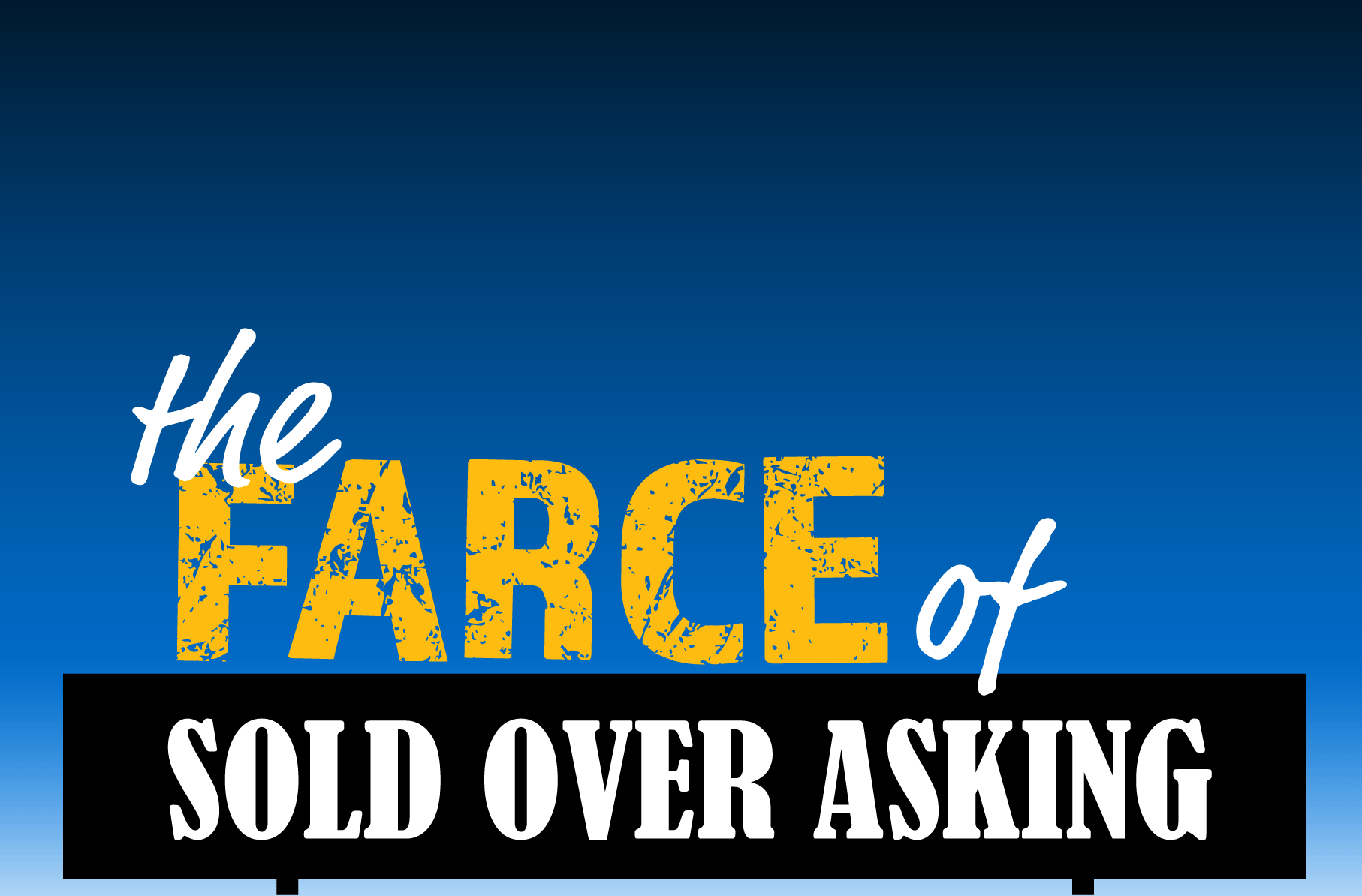 “SOLD OVER ASKING” … a sign that frequently brandishes recently sold real estate.  What does it mean?  The lawn to which the sign is attached sits a property that sold for more than the asking price.  What does this imply? The Real Estate Agent did a fantastic job selling real estate for TOP DOLLAR.

Now that we’ve established why it’s there and what it means, does it provide any value?  No.  Without context or a clear understanding of the market, it contains absolutely zero value. And, IMO, is a form of false advertising. It may occasionally signify a successful sale, but it often does not.  Here are some great recent examples to clarify my thoughts:

A quaint piece of real estate in Milton, Ontario, was on the market for a total of 68 days. During this time, the price was reduced twice for a total of $32,000.  Shortly after the second reduction, the house sold for $2,500 more than the reduced price.  Twenty-four hours later, the sign on the lawn read “SOLD OVER ASKING!” an unethical use of the term and certainly misleading in every intended purpose of the sign.  We watched this particular home closely because we had the same model coming for sale shortly after.

An exceptionally updated townhouse in the community of Georgetown, Halton Hills was listed for sale at a significantly lower-than-market-value price, and they were holding offers on a specific date. Pricing low and holding offers is a common strategy used to sell real estate depending on the current market conditions and seller motivation.  In this particular case, we had a home for sale a few doors down, so I naturally did my homework and completed a thorough valuation of that property to see how we faired in comparison.  The house ended up selling for significantly more than the asking price, but still $20,000 to $30,000 UNDER what I estimated its actual value.  What did the Realtor put on the sign shortly after the sale? “SOLD OVER ASKING!” –while it was undoubtedly true, it was still misleading as I genuinely believe that they left money on the table.

My friend in BC sent me a news article about a house in Toronto that “SOLD for $400K OVER ASKING!” … leave it to the media to make light of something they have little to no knowledge about –whatever it takes to make a headline.  While there have been cases of houses selling for more than what the typical person would perceive to be a fair price, this particular home sold within $20,000 +/- of what two similar homes on the street sold for in the previous month or two. We’re talking 7-figures, so a $20K swing, which a good chunk of change, wouldn’t have garnered the media’s attention even if it was in the $20K above market value range.

You will never see a SOLD OVER ASKING label affixed to a KT sign, but we will be sure to boast about our successes by providing context and value so that you understand just how the numbers add up.  The next time you see one of these signs, don’t let them fool you into thinking anything other than asking for more details.

Adrian Trott is a co-owner and licensed Real Estate Agent of The Kormendy Trott Team, living in Milton, Ontario.  In 2011, Ariel and Adrian left their careers in the Automotive industry to shake up the real estate industry. Both experienced sub-par service when selling their individual properties and saw an opportunity.  They’ve since grown to a team of agents, a Client Care Manager and a multi-media department. They’ve also been recognized by Century 21 Canada as a top-performing team in the country for the second time, 2019.  Their real estate brokerage is in Oakville with a designated team office and studio in Milton, where most of the real estate agents work.

There are no upcoming events at this time

Stay in Touch With Us

Go here for behind the scenes stuff and real estate tips.

Among other things, this is the best place to get first dibs on our new listings.

Check out our VLOG, property videos and podcasts.

Uncensored banter. This one has gotten us into trouble.

Get in Touch with Us